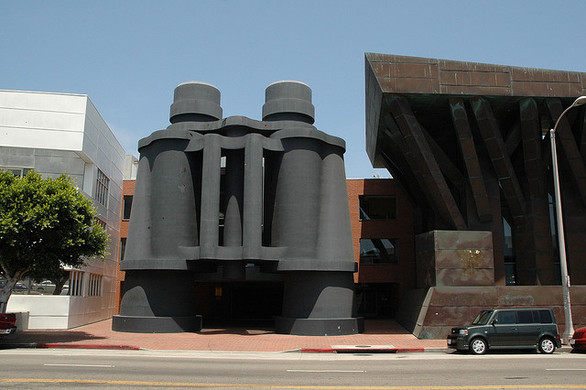 If you’ve ever walked down Venice’s Main Street, you might have noticed a pair of giant binoculars facing west on the facade of a building just south of Rose Avenue.  If you are a longtime westsider or Venice local, you might be aware that behind these giant binoculars, sit Google’s Southern California hub of engineering operations and North American advertising sales. This massive unique sculpture might seem like a cheeky modern installation, custom-designed for the global search colossus. In fact, these binoculars predate Google’s arrival in Southern California by almost a decade, and have been a Venice landmark since 1991, thanks to legendary architect Frank Gehry.

While often thought of as a California native, Frank Gehry was actually born in Toronto, Canada.  The Gehry family did, however, move to California by the time Frank was 18. He initially worked as a truck driver while taking classes at LA City College, before transferring to USC, and graduating with a Bachelor’s Degree in Architecture in 1954. While Gehry’s talent helped him rise to great notoriety and success, at times moving him across the globe for architectural endeavors, Southern California was always home. Many of Gehry’s earliest commissions were in the greater Los Angeles area, and one of Gehry’s most famous projects was the renovation of his own private residence in Santa Monica.

Gehry had close ties with many contemporary artists, including the innovative sculptors Claes Oldenburg and Coosje van Bruggen. Oldenburg and van Bruggen were well known for their large sculptures of common objects like apple cores and clothespins. Gehry had an idea, but he needed their expertise and vision for his upcoming project.

In the late 1980s, Gehry was working with Jay Chiat to build a new headquarters for his advertising agency Chiat/Day. Gehry had designed two distinct buildings to house the agency’s operations, but had the problem of how to join the structures. Gehry called up his friends Oldenburg and van Bruggen and they began to collaborate. In a meeting, Gehry picked up a model of a pair of binoculars and placed them in the architectural model. They fit perfectly.

The binocular sculpture was originally planned for an island community in Venice, Italy, to feature a small theater and library inside. Now, in Venice, California, the binoculars would feature conference rooms and the entrance to the parking garage. The project was commissioned in 1986 and inaugurated in 1991. It would be Gehry’s last project in Los Angeles until the creation of the Walt Disney Concert Hall downtown in 1999.

The binoculars still dominate Main Street, twenty-eight years later. Whether they serve an advertising agency, an internet search giant, or whoever comes next, they’ll always be a perfect representation of Venice – creative collaboration and the desire to take a closer look.

If you are in Venice and have never seen the binoculars in person, wander up Main Street and have a look.  If you post a photo tag your friends at the Venice Chamber – we love to see what Venice landmarks are getting love from tourists and residents alike!