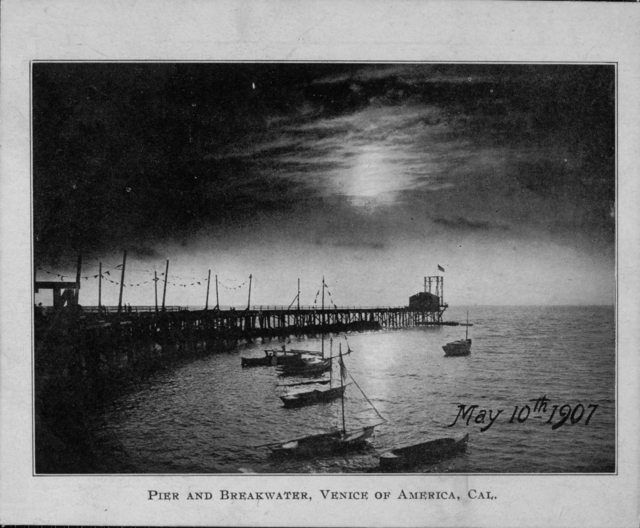 Did you know the birth of Venice was the result of a coin toss gone awry?  We owe it all to a land developer who was a transplant from New Jersey and had a unique vision for a city by the sea.

January 1904, Los Angeles: Abbot Kinney, land developer, met with his business partners for the last time. Their partnership had been initially successful, but the four men had completely different ideas about how to move forward. While Kinney’s partners wanted to expand a nearby casino, Kinney himself was interested in developing new land. The quartet decided to dissolve their partnership with a coin toss.

The terms of the toss were simple. The winner of the toss would have his pick of two properties: either the developed and civilized Ocean Park area to the North, or the primordial marshes and bare sand dunes to the South. The coin was tossed, and Kinney called tails. The trio groaned at their bad luck.

Kinney declared he would take the marshlands, to their surprise. His plan was to develop a new Venice in America. He would take inspiration from Venice’s famed canals and gondolas to create a Mediterranean oasis of culture and entertainment. Kinney would bring developers from across the country to construct a pier, hotels, a boathouse, a country club, and a chariot track. His ambition and vision were easy to ridicule, and detractors dubbed the plan “Kinney’s folly.”

While the people of Los Angeles respected Kinney’s vision, nature paid him no mind. Two brutal storms in February and March 1905 destroyed the pier and set the grand opening back by months. Kinney’s army of over a thousand workers toiled every day to rebuild what was lost.

July 4th, 1905, Venice Beach: Ocean water had been pumped into the canals and gondolas cruised the lagoons. Visitors had their pick of band performances, yacht races, fireworks, and riding a miniature railroad. Kinney’s folly was a dramatic success. The irony, of course, is that Kinney would have won the toss even if he had called heads.  Because of his choice, we all won, as “Kinney’s Folly” became the Venice we know and love today.