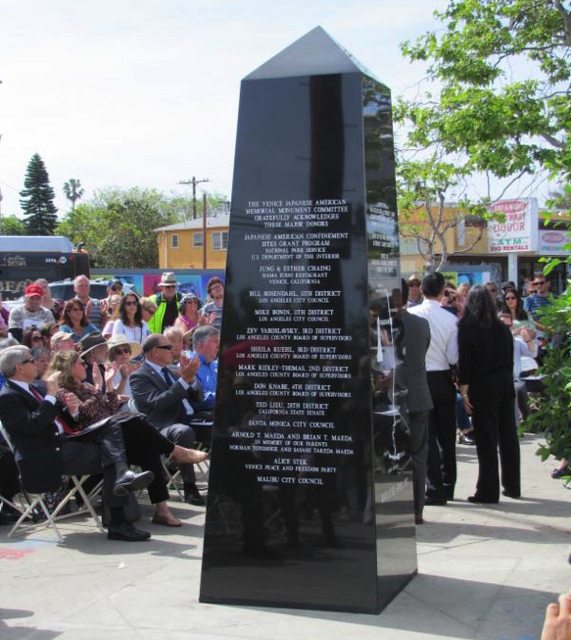 Have you visited the Venice Japanese American Memorial Monument lately?  It sits on the northwest corner of Venice and Lincoln Boulevards, and pays tribute to the 1000+ Japanese Americans in the Los Angeles area who were deported to the Manzanar internment camp in 1942.

After the Japanese attack on Pearl Harbor on December 1941, prejudice against Japanese-Americans unfortunately became widespread across the United States. President Roosevelt signed Executive Order 9066 in February 1942. This order authorized the deportation and incarceration of over 120,000 Japanese Americans on the West Coast. Over a thousand Japanese Americans from Venice, Santa Monica, Malibu, and the surrounding areas lined up on Venice Boulevard. Buses took them from Venice directly to Manzanar.

In 2009, the Free Venice Beachhead published an article by Scott Yuda Jr., titled “It Did Happen Here: When Our Japanese Neighbors Were Sent to Concentration Camps.” It was an unforgettable reminder of yet another way the war touched Venice and Los Angeles, despite their considerable distance from any battlefield. The article urged readers to contact Councilman Bill Rosendahl and ask him to support the creation of a memorial in Venice.

A student named Scott Pine brought the article into his American History class in Venice High’s New Media Academy. His teacher, Phyllis Hayashibara, encouraged the students to take action. In May 2009, Councilman Rosendahl invited the group to make a presentation to the Los Angeles City Council. Rosendahl agreed to support this endeavor, but the work was just beginning.

The Venice Japanese American Memorial Marker Committee – later to change their name to the Memorial Monument Committee – had its inaugural meeting in March 2010. The Committee included a diverse group of students, community activists, journalists, historians, and former Manzar detainees. They were motivated not only by the Japanese American experience, but by the similar attitudes that Muslim and Arab Americans faced after the 9/11 attacks. Their mission was to erect a monument that honored the past while serving as a warning for the future.

The group began fundraising efforts that spanned the entire community. They received a matching grant from the National Park Service and considerable donations from the Abbot Kinney Festival Association and the Venice Neighborhood Council. Local politicians, including the late Bill Rosendahl, City Councilmember Mike Bonin, and State Senator Ted Lieu all chipped in. Esther and June Chaing hosted seven years of fundraisers at Venice’s Hama Sushi and raised over $20,000.

Work on the monument was finally completed thanks in no small part to the Committee and the generous donations from Venice residents, business owners, and stakeholders.  It was officially dedicated on April 27, 2017. The keynote speaker was Warren Furutani, who was a major part of the annual Manzanar Pilgrimage events. The memorial itself features quotes from several Manzanar detainees, many of whom attended the dedication ceremony. The front of the memorial gives a concise and meaningful description of the injustice of internment, and continue to be importnat words for us all now and into the future. The last paragraph reads as follows:

MAY THIS VENICE JAPANESE AMERICAN MEMORIAL MONUMENT REMIND US TO BE FOREVER VIGILANT ABOUT DEFENDING OUR CONSTITUTIONAL RIGHTS.  THE POWERS OF GOVERNMENT MUST NEVER AGAIN PERPETUATE AN INJUSTICE AGAINST ANY GROUP BASED SOLELY ON ETHNICITY, GENDER, SEXUAL ORIENTATION, RACE, OR RELIGION.